In August 2020, Microsoft released an update to fix a critical Windows Server vulnerability in Active Directory – CVE-2020-1472 (better known as Zerologon). This update was successfully installed on all domain controllers 4 months ago. However, not every Windows administrator knows that installing an update on a DC does not do everything. This article discusses the Zerologon vulnerability, how to protect AD domain controllers against it, why another Zerologon update is scheduled for February 2021, and what a Windows server administrator should do about it.

The critical vulnerability CVE-2020-1472 in Active Directory in all versions of Windows Server (2008 R2, 2012, 2016, 2019) allows an unauthorized user to remotely obtain domain administrator rights. Due to an error in the implementation of the AES-CFB8 encryption protocol for the Netlogon Remote Protocol (MS-NRPC), an attacker accessing the Domain Controller on the network can increase his privileges and change the password of the Domain Controller account to AD. The attacker can then authenticate to the domain controller with SYSTEM rights and gain full control over Active Directory (resetting domain administrator passwords or other actions in AD).

The Netlogon protocol is used to authenticate users and computers on AD domain networks. Netlogon is also used to remotely update passwords for computer accounts in the Active Directory domain.

To implement the Zerologon vulnerability, an attacker must connect via Netlogon (using the following ports : RPC TCP/135, dynamic range of RPC ports, and SMB on TCP/445) with a specific sequence starting with zeros. The Netlogon vulnerability allows pretending to be a legitimate domain computer and changing the password of the DC account after increasing the rights.

Vulnerability received the highest score in the CVSS study (10 out of 10).

This applies to all versions of Windows Server :

Several public zerological exploits are currently in progress (a numerological module has also been added to the mimicatz).

Do not test Nullology on your network, because if you set the DC password to blank, it may damage your AD infrastructure.

There is a Python script that you can use to check for nullerological vulnerabilities in your CDs: https://github.com/SecuraBV/CVE-2020-1472.

Since Microsoft no longer supports Windows Server 2008 R2, there is no publicly available bug fix for this version of the operating system. However, if you have purchased an annual subscription to Extended Security Updates (ESU), you can download and install Update 4571729 for WS2008R2.

There is an unofficial Zerologon patch for Windows Server 2008 R2 – 0patch (https://blog.0patch.com/2020/09/micropatch-for-zerologon-perfect.html). Use at your own risk.

For other versions of Windows Server, updates are available via Windows Update, WSUS, or you can download the updates manually from the Microsoft Update catalog and install the MSU update file manually.

Updates regarding the vulnerability of Zerologon were released in August 2020. To protect Active Directory, you must install the August cumulative update (or later) for your version of Windows Server on all domain controllers.

Actually, the patch is only a temporary solution.

Microsoft will implement Zerologon in two phases that will enable a smooth transition to a secure Remote Procedure Call (RPC) in Netlogon:

After installing the first patch you can find connectivity events in the domain controller logs for devices using an insecure version of Netlogon RPC. In addition, if you do not have older devices on your network, you can disable support for the older version of Netlogon RPC on your domain controllers without waiting until 2021 (using the FullSecureChannelProtection registry setting).

After the installation of the security update, connection events of computers using the vulnerable version of Netlogon are logged in the logs of the domain controllers. Note the following NETLOGON EventIDs in the Event Viewer -> Windows Logs -> System :

By February 2021, you should install the latest security updates on all detected devices. Under Windows, simply install the latest cumulative update. Ask the device/software manufacturers (OEMs) for updates for all other devices that use the Netlogon remote access protocol to connect to Active Directory.

In February a special security update will be released forcing domain controllers to use the secure version of the Netlogon protocol. At the same time, devices specified in event 5829 (which do not support the secure version of Netlogon) cannot enter the domain. You must manually add these devices to the GPO exceptions.

This means that unsupported versions of Windows (Windows XP/Windows Server 2003/Vista/2008) will work in your AD domain.

How can I allow non-Windows devices to connect to the DC via Netlogon?

You must create a security group in AD and add the accounts/devices that must be allowed to create a secure channel with the domain controller using the old netlogon RPC.

Enable the policy for the DC (at the default policy level of the domain controller), click Set Security and specify the group that may use the insecure netlogon protocol (Vulnerable connection -> Allow). 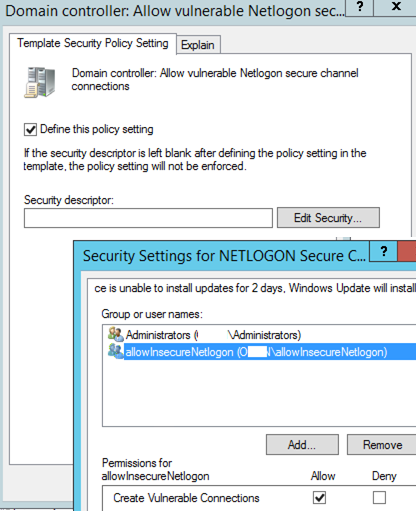 By enabling the reject option, you can prohibit the use of unsafe Netlogon RPCs for specific devices.